Combat in Darkest Dungeon 2 includes all the available combat mechanics in the game. Combat includes any kind of basic movement capabilities used such as evading, dodging and basic attack features. This also include unlockable combat features, abilities and how Stats and Trinkets in the game may affect combat. The combat page is a basic guide to layout any mechanics and Controls of the game to better aid players during gameplay. Players may combat information, stats, items that affect combat and other helpful mechanics. Combat is turn-based . In most cases, the fight lasts until one side is completely defeated. Once in a battle, there is no retreat.

"As stress mounts, a hero will become more irate and this increases the chances of NEGATIVE AFFINITY changes with other heroes. Try to keep stress low in order to promote a harmonious party.

In Darkest Dungeon 2, stress no longer triggers a heart attack, but instead triggers a meltdown. Stress is affected by various events and instances in the game. This is also accumulated by fighting during expeditions. Some enemies can specifically deal stress damage. Stress can be affected through the following ways:

"If a hero's STRESS bar fills up completely, that hero will suffer a MELTDOWN. Meltdowns have several undesirable effects.:  the hero suffers immediate AFFINITY loss with all other heroes and,  then the hero also drop to low HP." This mechanic replaces the heart attack that happens when a Stress meter is maxed out. Previously a heart attack would occur when the stress meter reached the maximum bringing their health down to 0 and on the verge of death and a debuff for the rest of the quest. A meltdown now also brings their health down, stresses out other Heroes and all relationships will be reset. 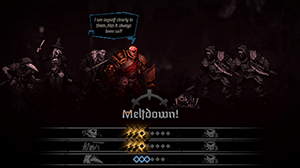 Completing missions does not heal stress like it combat damage and health. Completing expeditions will cap stress levels at 100 rather than resetting stress. There are other ways to relieve a Hero of stress, including the facilities built specifically to reduce stress. 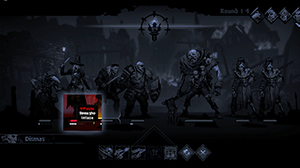 Aside from healing stress and decreasing stress, there are was to reduce amount of stress the Heroes receive.

With shorter runs for the campaign, Quirks this time around are more dynamic and may affect Heroes very early on, affecting relationships and stress. Upon Hero Selection, each character will bestowed 2 Quirks to begin with-- one positive and one negative quirk. In total each character may acquire 10 Quirks over time with a maximum of 5 positive and 5 negative Quirks. Players can only modify these quirks at the sanitarium 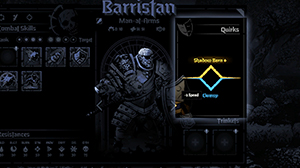 Each of the Heroes have their own set of Skills that are available to them and can be unlocked. The starting Heroes start with 5 and are able to unlock 6 more with character progression throughout the game. A combination of these selected skills are what created a good build, and a good relationship within the party. Some of these have requirements that must be met or rank that must be reached before it can be unlocked. Skills can also be upgraded with Mastery Tokens. One Mastery token can upgrade one specific skill. Some of these upgrades can affect a skills damage or even give them new effects and abilities. Up to 5 skills can be equipped at a time with a total of 11 skills per hero.

Weapons and Armor are unique to each of the Heroes. Weapon and Armor upgrades area a mechanic that has been wiped in the second game to give focus to existing stats, Rank, and Trinket effects.

Trinkets will now also be able to grant effects and play a bigger role in combat since there are the new main equip-able items without armor upgrades. These Trinkets will be one of the main factors that will affect stats and can be equipped anytime outside battle.

Items can be used to help characters now and do not take a turn during combat, which means players can feel free to use their items and still perform an action afterwards. Some items may be used multiple times, but will have a limited number of uses. Other items such s INN ITEMS can be used at the INN. They can heal, destress, bestow buffs and perhaps most importantly change the affinity between heroes.

COMBAT ITEMS are equipped into a dedicated SKILL slot on each hero. To equip one, [CLICK] the slot and then [DOUBLE CLICK] or [DRAG] the Combat Item from inventory. Equipping a combat item allows it to be used during combat. Combat Items are FREE ACTIONS . One item may be used each hero turn, right before they use their normal skill.

Tokens are now a new system added to the game that affect combat. They are added buffs, debuffs and Status Effects. Most Effects from he previous game- immobiliser, stun, bleed, blind and some combo attacks have more been turned into tokens. This guarantees a move that leaves combat less to chance than before where accuracy was a stat to rely on. Tokens are now sorted into Buffs, Debuffs, Stealth, Unique, and Special tokens. 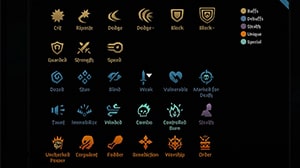 Stats like hit points, speed and resistance will still remain in the game, however familiar stats like dodge and accuracy have been wiped completely from the mechanics of the game. Most Status Effects from he previous game- immobiliser, stun, bleed, blind and some combo attacks are now presented as tokens.

Combat is turn-based . In most cases, the fight lasts until one side is completely defeated. Once in a battle, there is no retreat .

Each hero or enemy rolls INITIATIVE at the beginning of each round, and this is modified by their SPEED . The turn order is shown by the PORTRAITS in the top right of the screen. Only a partial turn order is shown--you can plan ahead a little, but not completely.

On a hero's turn, you may first use a COMBAT ITEM , if they have one equipped. This is a FREE ACTION . Then you may use a hero SKILL normally. Either way, [CLICK] on the item/skill in the displayed skill bar. You may also use the number key [1-7] corresponding to the skill slot.

Some attacks inflict a DOT (damage over time). BLEED, BLIGHT  and BURN > are all DOTs. DOTs cause damage at the beginning of the combatant's turn until they expire or are cured. Many SKILLS or COMBAT ITEMS can cure DOTs.

MASTERY POINTS are earned mostly through combat victories. Each point will upgrade one hero skill .

This tab shows any CONDITIONS present on the hero. Conditions are usually long term buffs or debuffs that result from INN ITEM use at the INN .

Dead heroes remain dead for this entire expedition but will be available for use again on your next try.

If a hero has died but you have unlocked additional hero classes on your profile , a reinforcement hero will await you at the next INN . This replacement hero will be randomly chosen from classes not selected at the start of this expedition. New heroes have no upgraded skills.

When the journey ends (via victory or defeat), you are awarded HOPE based upon how well you did. Hope is used to increase your PROFILE LEVEL . Even when an expedition is surely lost, it's often worth pressing on to get more hope.

Each hero pair has an AFFINITY value which describes how positive or negative they feel towards one another. If the affinity bar fills, the two heroes will enter a RELATIONSHIP.

Relationships are tested throughout the game. They are sorted into different levels are affected during combat and could affect combat itself. Depending on the Heroes' personality, one player's critical hits or defeats on another enemy, may negatively impact relationship. Characters now have the ability to feel envious and an impacted relationship during combat could affect its success when a character steps into to block another characters potential successful hits or even healing. These actions in turn may also affect other relationships between different characters. Positive relationships, on the other hand will yield positive results such as healing each other during combat. INN ITEMS can  change affinity between heroes and build positive relationships. Below are the types of relationship status that can be obtained in the game:

When a hero is reduced to )HP, they re on DEATH's DOOR. Any further damage has a chance to kill the hero depending on their DEATHBLOW RESISTANCE!

Use a helpful combat item or a healing skill to restore some of the hero's HP before they can be slain!

Some monsters have DEATHBLOW RESISTANCE just like heroes. When a monster is on DEATH'S DOOR , each further blow has a chance to slay it. Some skills and trinkets can increase the chance of EXECUTING the enemy outright. Repeated blows to the monster while it's on Death's Door will also reduce its deathblow resistance.