Stats in Darkest Dungeon 2 are the measurable values that make up how effective specific mechanics and skills are in the game, such as health, attack and defense stats. This page lists all available stats in the Darkest Dungeons 2 and what can be done to increase or improve these stats. This includes Items, traits, and Heroes types that directly affect stats and the conditions that change them throughout gameplay.

Health is the main stat used by each character. It determines a characters vitality and will be the determining factor on whether a character or Hero dies in Combat. A character that is too low on health and reaches a vitality of 0 will find themselves on Death's Door. Any further damage has a chance to kill the hero depending on their DEATHBLOW RESISTANCE! Players must then use a helpful Combat Item or a healing skill to restore some of the hero's HP before the Heroes are finished off during Combat.

Mastery Points are gained through Battles, Hero Shrines, Lairs battles, Completed tasks and missions. These points are used to upgrades the Heroes' Skills to make them stronger.  Gained Mastery Points are shown at the end screen after Victory. 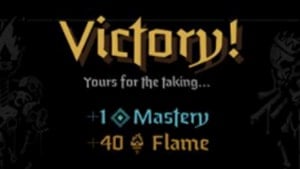 Damage over Time Damage is a stat that measures how affected Heroes are to these lasting effects. DOTs cause damage at the beginning of the combatant's turn until they expire or are cured. Many SKILLS or COMBAT ITEMS can cure DOTs. Each of these Damages have their own set of resistance stats that correspond to each effect. For example, bleed resistance determines how likely they are to receive bleed from bleed enemy attacks. The following damage types deal damage over time.

Debuff effects in Darkest Dungeon 2 are negative states that can affect both Heroes and Enemies. These debuffs reduce the effectiveness of a character in combat, and put them at a disadvantage. The current list of debuff effects are listed below:

Hero Resistances are the available base stats of each of the Heroes in Darkest Dungeon 2. Since Weapon and Armor upgrades have been taken out of this title, Heroes now rely on their base stat resistances. These can be temporarily increased by consuming Inn items only at the inn, that grants resistance bonuses, by equipping Trinkets, having certain positive Quirks, and by using combat items during a battle.

As stress mounts, a hero will become more irate and this increases the chances of NEGATIVE AFFNITY changes with other heroes. Try to keep stress low in order to promote a harmonious party.

In Darkest Dungeon 2, stress no longer triggers a heart attack, but instead triggers a meltdown.

Stress is affected by various events and instances in the game. The two biggest causes of stress are enemy combat skills which give stress to heroes, and negative banter between heroes. However, there are many things that affect Stress, such as:

The flame is a Stagecoach Stat in Darkest Dungeon 2. The flame level gets lower as you drive. The lower it gets, the harder things will be for the party. Some Trinkets and Skills are affected by a low Flame or high Flame Value and can grant effects based on flame size. Do not let the Flame expire. You can view the flame level by hovering the cursor over the wagon's torch.

When the FLAME gets below 40, things start to get significantly more dangerous for the heroes. Monsters get combat bonuses, and there are increased chances that BATTLE MODIFIERS will further increase the monsters' power. The waning flame also increases the chance that heroes will develop negative affinities with each other. Visit ASSIST ENCOUNTERS to raise the Flame, or use combat items that increase the torch level.

When the FLAME reaches 0, the heroes are ambushed by fiendish Cultists. If the heroes survive the fight, then the expedition will continue and the Flame will reset to 40.

Loathing is a new stat feature found in Darkest Dungeon 2. It is indicated in the top left corner of the screen. "Evil is overtaking the world, as shown by the LOATHING METER."  Higher loathing results in tougher conditions for the party. It also decreases  the chance at accumulating mastery points which are needed to upgrade Skills. 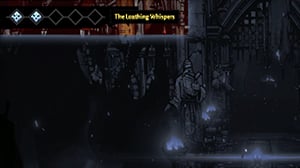 Affinity is a stat measured between each of the Heroes in Darkest Dungeon 2. Each hero pair has an AFFINITY value which describes how positive or negative they feel towards one another. Affinity can become either a positive or negative stat which affects gameplay and combat.

If the affinity bar fills up in either direction, the two heroes will enter a RELATIONSHIP.

Below are the types of relationship status that can be obtained in the game:

Status effects are the lasting results of a combat interaction or skill. Status effects in this wiki are sorted as Buffs, Debuffs, Stealth, Unique and Special effects.